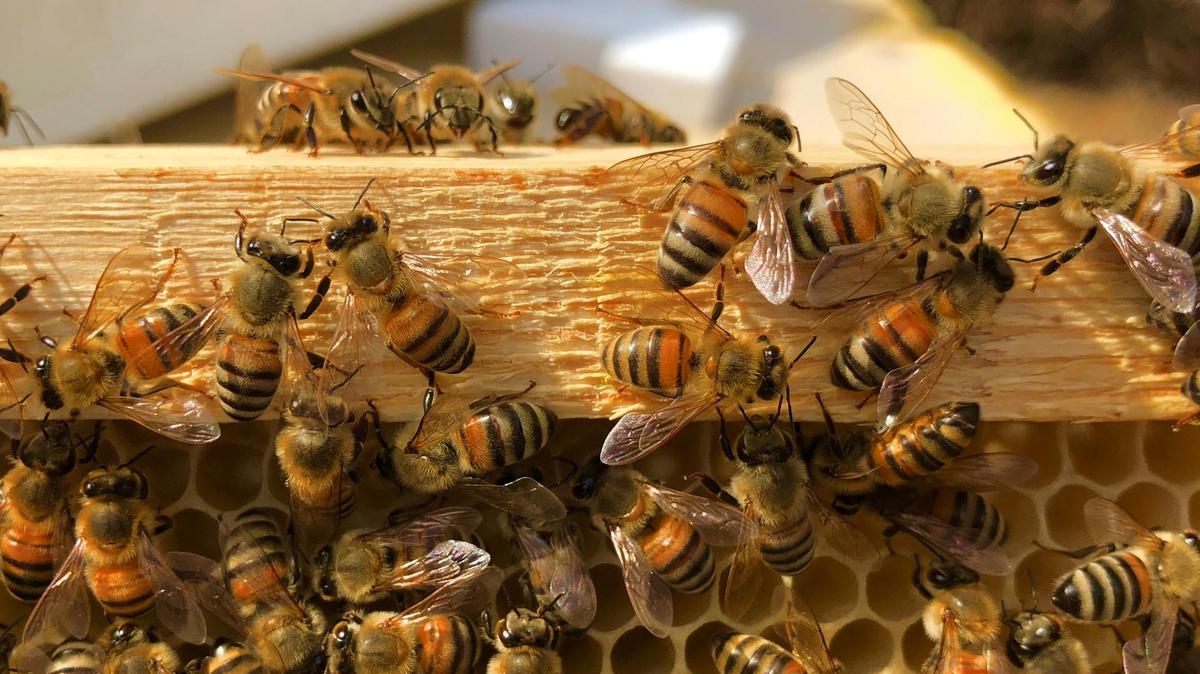 Honeybees are active pollinators and produce honey which feeds their young in colder months. The honeybee is the only social insect whose colony can survive many years. Honeybees produce honey from pollen and nectar of the plants they pollinate. They store the honey in honeycombs in their nests. They often build their nests in tree crevices, but will occasionally build nests in attics or chimneys.

Honeybees do sting, but they only sting once. The sting can be extremely painful if the stinger is not immediately removed from the sting. Persons allergic to insect stings will have a more severe reaction. colonies of bees that establish themselves in attics or wall voids of homes near a home can be serious problems. After bees establish permanent homes, they can become very defensive and are much more likely to sting than are swarms.

Honeybee management should be addressed by a professional. Treatment or removal of a honeybee nest and the honey product can be very messy. Because honeybee colonies are so large, only a honey bee pest control professional or experienced beekeeper can safely remove a honeybee nest. Remember, you do not get too close though, bees are much less aggressive than wasps but if you get too close to their nest then that is one circumstance when they can get defensive. That is also the main reason why you should never try to get rid of the nest yourself, only pest control technicians with the training and professional equipment have the capability to get rid of a bee’s nest effectively and safely.

The nest can be located sometimes by tapping the wall with a hammer and listening for an answering buzz from the bees. When the nest is located, a hole may be bored, preferably through the outside wall, so the insecticide can be applied onto the nest. Swarms are more easily killed soon after they enter the building. Established swarms are best killed in late winter when their numbers are low. The best time of the day to apply the insecticide is in the late afternoon when all the bees are at home. The bees will be less cross on nice days than when the weather is overcast or rainy. Do not plug the hole immediately after dusting the nest because this may force agitated bees into the living quarters of the home.

After the bees are killed, it is best to remove the nest if it can be done without causing extensive structural damage. Remove and discard the comb and honey. Do not salvage these materials if the colony was treated with insecticide. If the nest is not removed, the wax may melt or be riddled by wax moth larvae and begin to leak honey. If there is much honey it can seep through interior walls, leaving a permanent stain. Bees from other colonies can also be a nuisance around the home as long as honey remains to be robbed from the killed colony. Other scavenging insects, such as carpet beetles, are also attracted to killed bee colonies.

After a dead colony has been removed and the structural damage caused in removing the colony has been repaired, plug up all entrances through which other bee swarms can enter. Older homes which may have cracks in walls or under eaves are likely candidates for honeybee invasion. These holes should be plugged or screened prior to the time bees begin to swarm to prevent colony establishment. Odors left by the colony can linger for a long time and attract other swarming bees.